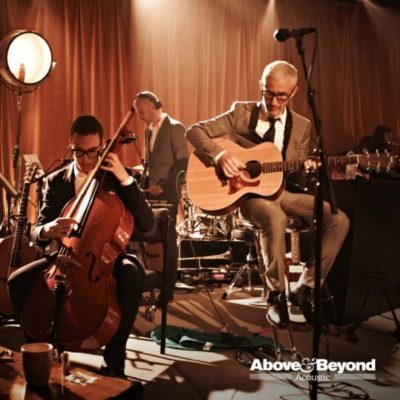 In in the beginning of 2014 Above & Beyond took their music to a new level as they performed some of their best-loved songs acoustically as part of a 15-piece band, across four sold out shows at London’s famous Porchester Hall. The response from fans was overwhelming and led to two sold-out nights at The Greek Theater in Los Angeles in October, described by Billboard Magazine as “one of the finest and more memorable shows in EDM history.”

The Porchester Hall performances and the story behind the acoustic project found a wonderful documentation in a film and also form the basis of the “Above & Beyond Acoustic” studio album, which was recorded in the spring and summer of 2013. Sit back, relax and enjoy these magic moments together with Paavo, Jono and Tony!

Watch here “Above & Beyond Acoustic”:

Tagged  Above & Beyond, Acoustic, Anjunabeats.
Bookmark the permalink.
We use cookies to ensure that we give you the best experience on our website. If you continue to use this site we will assume that you are happy with it.OkNoRead more