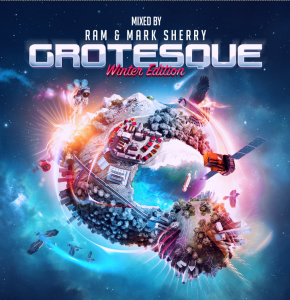 On December 12th last year it was time for one of the most spectacular parties that trance has to offer: Grotesque Winter Edition 2015 at Central Studios Utrecht. The event celebrated a big milestone, the 200th Grotesque Radio broadcast! To hold on to that memory you can now ebjoy the Grotesque Winter Edition 2015 compilation, mixed by none other than RAM & Mark Sherry! Together they make sure you’ll be in a Grotesque state of mind for more than 2.5 hours with two banging mixes. Essential listening material for sure!

Grotesque resident RAM has been one of the most prolific DJ’s in the Dutch Trance scene for quite some time now, his music moving fans in both the Netherlands and abroad. 2015 knew multiple great solo singles as well as collabs with Susana, Talla2XLC, Kim Kiona, James Dymond and Stine Grove. It was also the year he released his Forever Love album, an ode to his late wife Amelia. His Grotesque Music imprint is delivering one excellent tune after the other, gaining ground in the industry.

Scottish tech­trance maestro Mark Sherry is being recognized as a dedicated and enthusiastic presence in the industry, with original productions and remixes. His inexorable passion and drive for his craft is evident in his diverse and well ­rounded collaborations and full body of work, both in the studio as well as his vivid and technical DJ performances spanning the globe. Mark also manages his own Outburst and Techburst labels and hosts his weekly Outburst Radio Show. There is no sign of slowing down for this genre-bending artist and 2016 will be another step up!

Grotesque Winter Edition mixed by RAM & Mark Sherry will be out on February 05th 2016!

Get your copy at iTunes:
https://itunes.apple.com/us/album/grotesque-winter-edition/id1072368588