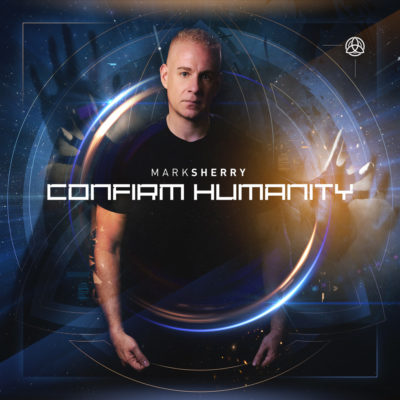 Two years back Mark Sherry had his humanity questioned. Nobody – least of all he – could have known it’d trip off his first artist album. Clicking a captcha to “confirm” his “humanity” was an innocuous, seemingly fleeting moment. Everything that followed that, well, markedly less so. Over the following minutes, hours, days & weeks he returned to the question with ever-increasing interest.

Mark Sherry about the album: “In hindsight it was a bit of a lightning bolt moment. It got me thinking, ‘wow, we’ve actually reached the point in civilisation where we have to identify ourselves as a person, not a machine, and – to of all things – a machine!’ If someone told me when I was 10, I’d have to do that, it would’ve truly blown my mind. Really, as I see it now, in this life any eventuality’s possible.”

As an album began to crystallise around the “Confirm Humanity” question, its significance appeared to take on numerous other forms, not least social, cultural & existential ones. To Mark, it moved from being a seed to a metaphor and onto a motif – eventually developing into a refrain for life in the modern world.

Throughout its studio development, Mark sourced a litany of elements that chimed with “Confirm Reality”’s central theme. Some overt, some nuanced and others Easter egged and for the sharpest ears only, within its fabric they make for an album which transmits both music & meaning. Through tracks like “The End Is The Beginning”, “Triquetra”, “Method To My Madness” and “I’m Not A Robot”, Mark even poses some questions of his own.

In this debut album quest, Mark’s been flanked by a cadre of co-producers from his Outburst Records universe and beyond. Richard Durand, David Forbes, Tempo Giusto, Vlind, Mallorca Lee and others joined him in the studio, ultimately assisting in the serving of 18 desk-fresh tracks. It also involved the remixing of legends like Tiësto and the vocal talents of Marcella Woods, Christina Novelli & others, sitting thought-provoking songs amongst its floor roasting instrumentals.

“The future as we know it is over” speculates the introductory crawl for “The End Is The Beginning” and with it Mark and long-time studio sparring partner Mallorca Lee deliver the fiercest of precedents for the album. From there, well you know better than to expect any breathers from Captain Outburst! In solo mode comes the vociferous statement of “I’m Not A Robot”, whilst “Method To My Madness” shakes the system further – posing provocative questions of its own. “What are people gonna think in another 4 years?” ask Mark & Tiempo Giusto on “Celestial Body”, whilst “Chopperchunk 2.0” (alongside the UK’s Joey V) charges up the batteries for some pitch, warp & distorted tech-tenaciousness.

Mark Sherry’s debut album “Confirm Humanity” is out on May 17th 2019 via Black Hole Recordings!

Get your copy here:
https://blackhole.choons.at/confirmhumanityalbum

Tagged  Christina Novelli, Clare Stagg, Confirm Humanity, David Forbes, Marcella Woods, Mark Sherry, Richard Durand, Tempo Giusto.
Bookmark the permalink.
We use cookies to ensure that we give you the best experience on our website. If you continue to use this site we will assume that you are happy with it.OkNoRead more