Tim (from Stark Profiles) set down with Mark Sherry and talked with him about his debut album “Confirm Humanity”! Enjoy reading!

Tim Stark: Thanks for letting us throw some “Confirm Humanity” – sized questions at you, Mark – let’s talk! First up then (and probably the most obvious), why – after fifteen or so years as a dedicated singles man, have you decided to go full album!?
Mark Sherry: “Thanks a lot for the interview guys first of all! I suppose there are a number of reasons. The first being that my touring always eats up a lot of my time on a monthly basis, and if the music releases stop then the touring fizzles out – to a certain extent. So you need to release music (singles) at a steady pace to keep things ticking along, especially these days with the speed that things are moving at. So, to set aside 2 years of my life for the album took a lot of preparation, like locking in my studio time, making sure I had a good creative flow when I actually was in the studio, and of course working all of that around my touring. It’s not an easy thing to do…but I can breathe now!”

Tim Stark: Now was it really that ‘Confirm Humanity’ Captcha box that set this in motion, or had the idea of recording one been percolating – to at least some degree – before that?
Mark Sherry: “The thought of producing an album has been on my mind for well over 10 years now, but as for me actually pressing the ‘I’m going to start making an album now’ button happened at the start of 2017. The ‘Confirm Humanity’ concept magically happened halfway through 2017 when I first experienced that ‘captcha’ page, as I was trying to log in to a website. It hit me like a brick in the face, the scary realization that technology has become so advanced and intelligent that it’s effects were starting to creep into our everyday lives – having to prove/confirm to a bot that I was human before I could proceed. It was a total ‘Bladerunner’ moment, human vs. A.I. – and the main catalyst that got me starting to think about the whole concept of the album, a massive light bulb flicked on in my brain. It was just meant to be!”

Tim Stark: As the aforementioned track-by-track man, do you think that approaching an album was a more daunting prospect for you than your average first-timer?
Mark Sherry: “It was daunting, for sure, but I’ve always worked really well under pressure, so I just rolled with the punches and got the first 5 tracks done, to use as a main foundation of the album. I’ve made 2 albums before as part of 2 different bands/groups, so I knew what was required, but the thing that was different this time was that I was extremely well prepared in the studio – physically and mentally!”

Tim Stark: Both on the surface and in the fabric of its concept, there’s a lot being said & suggested with the album. Is it primarily about artificial intelligence, or life in the technologically advanced world or something else? How would the man behind it sum it in a sentence!?
Mark Sherry: “It’s pretty much all about artificial intelligence, technological advances, our purpose here on the planet, space, religion, imagery, symbolism, humanity.. in a nut-shell. It’s heavily inspired by films like Interstellar, Sunshine, Prometheus, Bladerunner etc. Sorry, that was way more than one sentence lol”

Tim Stark: Title track aside, can you pick up on some of the album’s tracks, which best showcase the theme and give us a little background to them?
Mark Sherry: “Triquetra is a tribal tech-trance track and the word ‘triquetra’ has 2 meanings’: It’s the name of the religious symbol for the Celtic Cross, but it can also mean/represent ‘past, present & future’, which conveniently ties in with the musical theme on the album, as in some of the tracks have a classic sound, some are modern and some are futuristic. If you Google the word ‘triquetra’ you will see the shape of the symbol and how it’s 3 triangular sections meet in the middle, which suggests that these 3 moments in time (past, present & future) could potentially all meet at the same point. Suggesting that time doesn’t move in a straight line, it’s not linear as we imagine it – running from past to present to future – but in more of a circular motion. If you watch the absolutely amazing TV show ‘Dark’ on Netflix, it explores the whole idea of time-travel and how each section of time can impact the other, which this track is based around, basically. The title is also related to religion and the fact that people have so many different types of religious beliefs, and it’s these beliefs that in many ways make us human. I’m not much of a religious person, I believe more in scientific facts as oppose to religion, but the ‘Dark’ TV show got my head in a spin about humanity, so in turn that gave me lots of good ideas for the album.”

Tim Stark: To give readers an idea of how the production as a whole came together, what was the first track to be completed, your mid-production point and the final one?
Mark Sherry: “I started a collab with my old friend, the extremely talented David Forbes in 2017, called ‘Yerba Del Diablo’, so that was really the first track that was locked in for the album. I suppose ‘Triquetra’ was a halfway point, cos actually I road-tested that at Luminosity last year.. And the final ones were ‘Luminosity Theme’ and ‘I’m Not a Robot’, which I’m both really proud of”.

Tim Stark: And which was the quickest and which the trickiest?
Mark Sherry: “The quickest was ‘Method To My Madness’, that track just seemed to write itself! The trickiest one was definitely ‘I’m Not a Robot’ – there is a ridiculous amount of layers in that track and an absolute ton of effects running over the percussion buses and stabs/elements to get all of the crazy feedback effects going on in the background. It was time well spent though in my opinion!”

Tim Stark: To the nearest month, how long did the album take to produce?
Mark Sherry: “24 months from the beginning of the concept to finishing the last edit of the last track – a long time!”

Tim Stark: No unsurprisingly you’ve taken the opportunity to work with some new co-producers on the album. Was it a tussle settling on exactly who you wanted to work with or a no-brainer!?
Mark Sherry: “It all worked out really well to be honest. I am really good friends with David Forbes and Mallorca Lee so it was very easy to get them into the studio to work on our collabs together. We have a lot of history together so it’s always a great laugh too! I’m also friendly with Richard Durand, Ross Ferguson, Tempo Giusto, Vlind, Joey V, Clare Stagg and Marcella Woods too. So it always makes things easier when you work with people that you actually know, respect and admire. I only met Christina Novelli recently at our video shoot for ‘Lighting Fires’, but she’s really nice and very easy to get on with – and amazingly talented! I worked with Tuomas (Tempo) in his studio while I was over in Finland for a weekend in 2018, and I then finished the track off in my own studio at the start of this year. I also worked with HP Source in Adelaide but it was the least developed track in the pile so I had to shelf it for the moment. But I’ll get back onto it one of these days!”

Tim Stark: Likewise, what was the criteria for you when selecting which vocalists to work with?
Mark Sherry: “I’m really fussy when it comes to vocalists to be honest, and unfortunately I feel that the trance scene is full of just mediocre vocalists. There are very few that can really belt it out with lots of soul and power that make me think ‘wow, will you listen to her/his voice, that’s incredible’. A really good vocal should give you goosebumps. Induce some kind of emotion/reaction, grab your attention in everyway. Or all of the above to be honest – all of the vocalists on this album have that effect on me. They all have very different styles and tones, but each of them has their own very distinct and instantly recognizable sound. They all have really great diction too. My pet hate is hearing vocalists that mumble. I want to be able to hear every single word that they are singing, so that I can really get behind the vocal and feel as if I’m part of the story that they are telling.”

Tim Stark: Now it’s done and released, are you happy that it was worth the production endeavor?
Mark Sherry: “I couldn’t be happier or prouder to be honest. I think it’s easily the best collection of tracks that I’ve ever put together (along with the collaborative artists as well of course). I just hope my followers think the same haha – but from the reactions and comments that I’ve read so far, it’s all been very positive. Mixmag have just made it their ‘album of the month’ on their trance pages too, so I’m absolutely delighted about that! I was happy with the tracks that I made for this album in 2017/2018, but the studio work that I’ve spent on the tracks in 2019 couldn’t have gone any better – it’s been the icing on the cake for me. I’m not the fastest worker in the studio, but I was absolutely flying along from December right up until the deadline in April this year, the tracks just seemed to write themselves – it felt like I was on auto-pilot. It’s been an amazing period of my life and I’m already thinking about when my next album will be…”

Tim Stark: And fan-response-wise which single piece of feedback has put the biggest grin on your face?
Mark Sherry: “I was extremely careful to make sure that all 18 tracks were as good as they possibly could be, but I suppose in my head there were 2 or 3 where I wasn’t quite sure if they would be accepted as well as the others or not. So to see some comments from my followers online saying stuff like ‘this is my favourite track on the album’ about some of the less obvious tracks, was really amazing. I felt a huge relief because I could see that it wasn’t just the more obvious tracks that were getting a great reaction but some of the ‘dark horses’ on there too. I’ve been really touched by a lot of the comments but one really stuck out to me. It said that he was glad that I’d waited to release a good solid album and not rush something out a few years ago, just for the sake of it. They also went on to say that they thought it was great how all of the tracks grabbed their attention and not just a small handful of them, like you get on a lot of albums. So that was really cool to read, especially with it being my first ever artist album that’s been released under my own name. So that made me feel really good about it all”.

Tim Stark: Thanks Mark and best of luck with the album’s ongoing progression!
Mark Sherry: “Thanks a lot, much appreciated!” 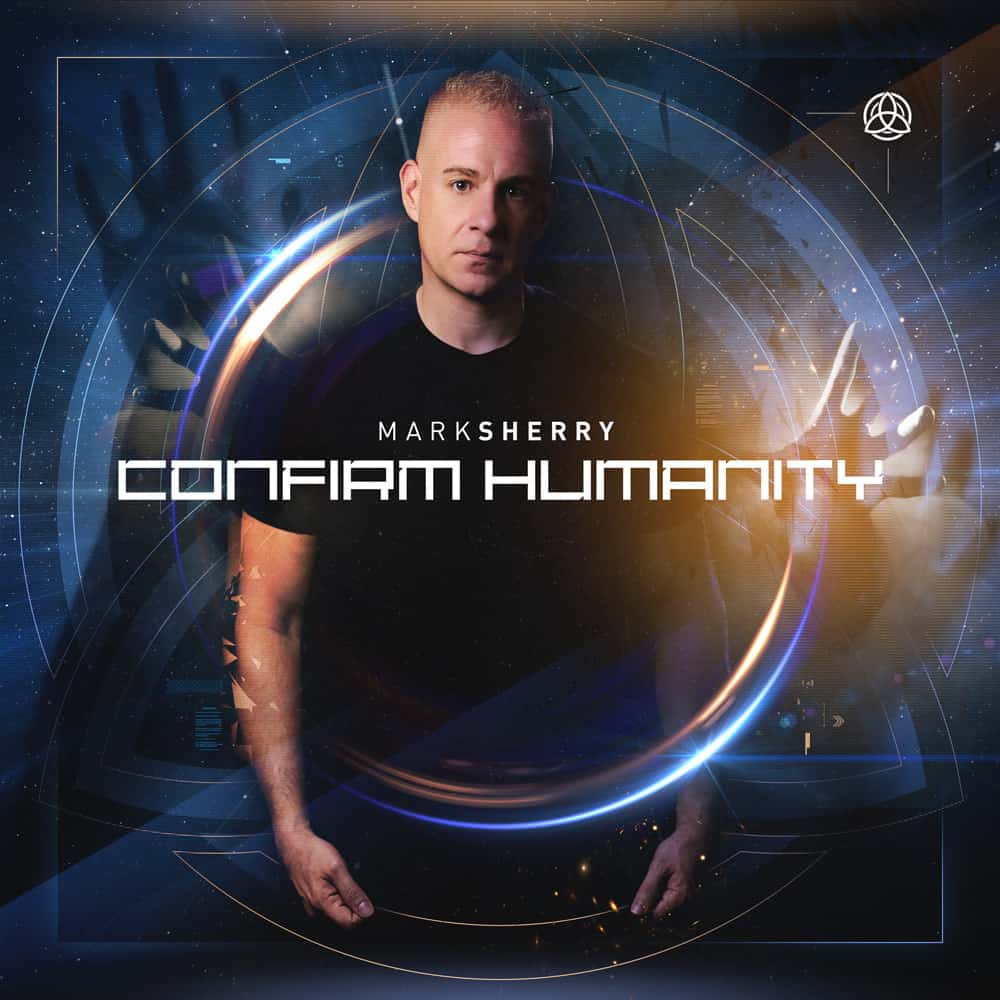 Tagged  Confirm Humanity, Mark Sherry.
Bookmark the permalink.
We use cookies to ensure that we give you the best experience on our website. If you continue to use this site we will assume that you are happy with it.OkNoRead more