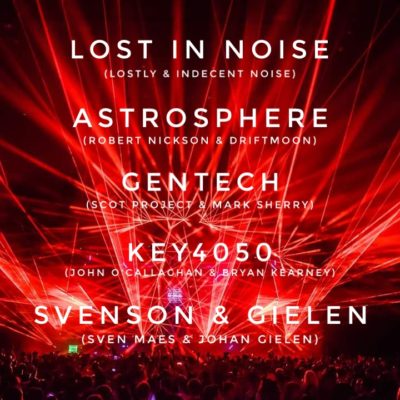 In some way Markus Schulz and Ferry Corsten seem to have created a new trend. With their project New World Punx they created a project back in 2013 which was more than only a studio collaboration. With “New World Punx” they created an additional trademark next to their solo careers which found its way from the studio also to the stages of the world. For sure even before Markus & Ferry’s New World Punx Deejay Projects like B2B-sets or Track-Collaborations were not new to the Trance scene but in some way the New World Punx took this to a new level. Even if it has become silent around Markus & Ferry’s project, it started a movement which founds a new peak in 2018.

Till today the most popular more Musician and less Deejay Project is Pure NRG which was founded by Solarstone and Giuseppe Ottaviani in 2014. Since their debut in August 2014 during Future Sound Of Egypt 350 in Buenos Aires Rich & Giuseppe have established Pure NRG as a great live act with countless breathtaking live performances and fantastic single releases. Following this way you can find in 2018 several debuts of new created Deejay Projects which add a wonderful new side to the already established names and bring in some way a variety to the more and more repetitive Line Ups of Trance Events. But is this a trend which brings also variety to the dance floor and the trance scene? We are curious how things will develop and we are excited about the announced debuts and forthcoming appearances. On which Deejay Projects you should keep an eye on? Let’s have a look!

Lost In Noise (Lostly & Indecent Noise):
Originally the track title for a Lostly & Indecent Noise collaboration back in 2014, “Lost In Noise” became also the project name for their bundled activities in the studio AND behind the deejay decks. With their live debut at the Luminosity Beach Festival 2018 Andre and Aleksander showed with an impressive and powerful performance what you have to expect for the near future from the sympathetic guys. Their slogan is program… Make Acid great again!


Astrosphere (Robert Nickson & Driftmoon):
Robert Nickson & Driftmoon truly need no introduction with Robert’s blend of true Trance and Driftmoon’s unique approach. The first life sign of their new project “Astrosphere” can be found on Driftmoon’s latest album “Invictus” with the track “Fire Which Burns Us All” which will get own official single release on Coldharbour Recordings. Robert & Juraj made their live debut at the Luminosity Beach Festival 2018 and the reactions were amazing. They delivered an unique live show which showcased their extreme talent for composition, production and deejaying… a truly One-Of-A-Kind Experience! A follow up is already announced… at Dreamstate SoCal 2018!


Gentech (Scot Project & Mark Sherry):
Fresh announced is the project “Gentech” of German legend Frank Zenker aka Scot Project and Outburst Records label head Mark Sherry! The debut is announced for Dreamstate SoCal 2018 in November. Following their collaboration “Acid Air Raid” in 2015, Frank became a fixed part on Mark’s label Outburst Records. So Gentech can be seen as the next logical step? May be, but for sure you can expect a great mixture of both worlds – the harder sounds from Frank and the techy side from Mark.

Happy to announce that I will be part of Dreamstate in November as GENTECH with Mark Sherry. Representing our harder edged and energetic Trance Sounds 💪😃#marksherry #scotproject #techtrance #hardtrance #dreamstatesocal https://t.co/oPSTw5GeFg

Key4050 (John O’Callaghan & Bryan Kearney):
Officially formed in 2015, Key4050 sees John O’Callaghan and Bryan Kearney joining forces. Both hailing from Ireland, the two genre giants have known each other and have been making music in the same circles for more than 15 years— which means that, in many ways, Key4050 has been in the works for just as long. (In fact, the name Key4050 dates back to their early collaborative days, when John was living in a Dublin apartment that required a key code to enter the building. That code: Key4050.) The first official inklings of Key4050 came in 2016 via their debut track “Dinklebot”. One year later, Key4050 made their official worldwide premiere at Dreamstate SoCal 2017.


Svenson & Gielen (Sven Maes & Johan Gielen):
Svenson & Gielen are not one of the new deejay projects in the scene, but a wonderful comeback. Sven & Johan were active as Svenson & Gielen in the early 2000s and created during that time some of the biggest classics of all time with “The Beauty Of Silence”, “Twisted”, “Answer The Question” and “We Know What You Did…”. 15 years after their last release as duo back in 2003, Sven & Johan decided to go back into the studio and also together on the stage. After their amazing comeback gig at Electronic Family 2018, we can’t wait for new stuff from them.

CVNT5 (Ashley Wallbridge & Gareth Emery):
Who the f*** are CVNT5? This duo entered the headlines back in 2016 with their documentary about the DJ Mag corruption. This look behind the scenes were a wonderful persiflage on the DJ MAG Top100DJs poll and the electronic music scene. This art project from Ashley Wallbridge & Gareth Emery is not a normal deejay project but they are a colorful & funny mirror of the music scene. 😉