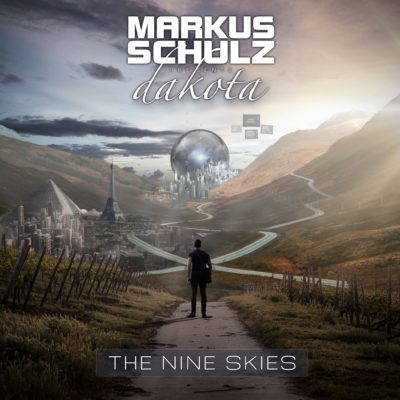 The moment has finally come. Nearly one year after the anouncement of the return of alter-ego Dakota und the release of a concept album the release is near. Alongside with his performance as Dakota at Transmission in Prague, Markus revealed the final results of his Dakota album “The Nine Skies”.

Markus has always seen Dakota not as an alias but as a persona – an identity even. He explains: “Sometimes I’m wearing Dakota’s head; other times it’s Markus Schulz’s. Through that division, I’ve found the artistic space to make darker, moodier, deeper music. More exploratory and experimental gear… if that’s where my current state of mind is taking me.”

Markus Schulz about the album: “The Nine Skies is my representation of the nine steps we all go through to reach enlightenment in life. I want people to come to these special Dakota shows and open their minds to its music, message and its visuals – the trinity of which will take them on a journey. Your journey, their journey, everybody’s journey together. Dakota is darker in its beats, and wiser with the messages it wants to share with the world. Questions like ‘what is the secret of life? Why are we here on earth? What is our purpose? These are just some of the questions we have and The Nine Skies show will explore.”.

Markus considers that if there’s one thing enlightenment does take, it’s time. “Rarely, if ever, in life does something happen overnight” he says. The release of the album’s first four singles was designed to reflect one of the possible journey arcs from darkness to enlightenment. That started with early album track, “Mota Mota” and ended with its penultimate one, “The Spirit of the Warrior”. “Its over-arch moved from one of the most ominous darkly-minded, night-black numbers I’ve written to possibly Dakota’s most uplifting, emancipating moment ever”, says Markus.

The underlying theme of each of the 18 tracks on the album broadly falls into one of the Skies’ nine realms. “That is not something that’s going to be immediately apparent the first time you listen to it. Give it time though, and over subsequent spins I think, you’ll get an ever-greater feel for the transitional passage the album is taking. From Sky.One’s The Follower, transcending right the way over to the ninth Sky: Nirvana.” :cautions Markus.

Markus Schulz presents Dakota – The Nine Skies is out on December 08th 2017!

Get your copy here:
http://markusschulz.choons.at/thenineskies