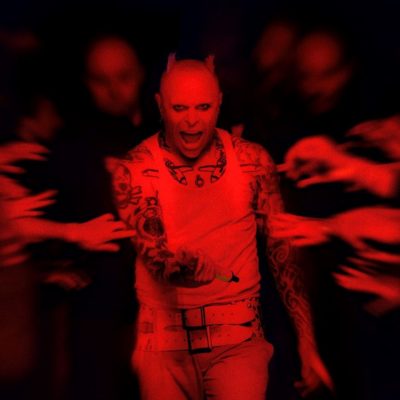 Keith Flint, lead singer of influential British dance-electronic band The Prodigy, was found dead this Monday, 04th of March 2019, at his home near London. He became only 49 old.

Officially is the cause of his death stated from the Police as “unknown”, but a statement from Prodigy co-founder Liam Howlett on Instragram hints a suicid from Keith: “I can’t believe I’m saying this but our brother Keith took his own life over the weekend. I’m shell shocked, fuckin angry, confused and heartbroken ….. r.i.p brother.”

Keith was the stage persona of the band, which were in the nineties one of the biggest influencers to the electronic music scene with their fusion of techno, breakbeat and acid house and legendary classics like “Out Of Space”, “No Good”, “Firestarter” and “Smack My Bitch Up”. He was renowned for his manic stage energy and distinctive look: black eyeliner and hair spiked into two horns.

The Prodigy sold over 30 million records, helping to take elecztonic music from a community of party-goers to an international audience.

“It is with deepest shock and sadness that we can confirm the death of our brother and best friend Keith Flint. A true pioneer, innovator and legend. He will be forever missed. We thank you for respecting the privacy of all concerned at this time.” stated the band via Facebook.

It is with deepest shock and sadness that we can confirm the death of our brother and best friend Keith Flint. A true pioneer, innovator and legend. He will be forever missed.
We thank you for respecting the privacy of all concerned at this time. pic.twitter.com/nQ3Ictjj7t

Truly in shock to read the news about the passing of Keith Flint. His work was a massive inspiration, breaking boundaries. Rest in peace

Oh my goodness not Keith Flint.
I was fortunate to tour with the Prodigy multiple times in the 2000's era!
Be a firestarter up in the skies legend!
😞 #RipKeithFlint pic.twitter.com/J0dwfQbN9Q

You and the band have been such a massive influence to me ever since I was a teenager, I can’t thank you enough. It hurts all of us to know just how much you’ve been struggling.

I hope you are at peace now, you’ll always be in our hearts ♥️ pic.twitter.com/HjWbt98Zk8

Devastated by the news of Keith Flint’s passing this morning. Prodigy was one of the best music groups I knew, I used to love so many of their classics such as “Smack My Bitch Up” or “Firestarter” as well as their new stuff such as “Timebomb Zone”.
Rest In Peace Keith! 😢 pic.twitter.com/ytHUNzHd8m

So sad to hear that my biggest idol from the 90s Keith Flint passed away. I raised with music of The Prodigy. Tracks like Poison, Firestarter, Voodoo People, Your Love or Hyperspeed was on repeate (on cassette's later on CD's) for a very long time. Thank you for amazing music RIP

I still can’t believe the news. Keith Flint was one hell of a frontman from one hell of a band. I’m gonna blast Music For The Jilted Generation all afternoon on 11. Farewell, Firestarter, TWISTED FIRESTARTER. https://t.co/aIPZLB7uwv

So sad to read about Keith Flint, UK dance music's most iconic and powerful front man. He started fires in so many of us.

Just heard of the passing of Keith Flint from The Prodigy… Yet another one who left this earth too soon. I wouldn't be where I am without their work in the 90s that made me a true raver.

RIP Keith flint, such a huge inspiration to me. Sad news, such a legend of dance music. 😢

I’m shocked to hear The Prodigy’s Keith Flint has died. I’ll never forget hanging out with him the band during our FMF tour in Australia! Such a calm, quiet, genuine guy. To Steve, Leo, Rob and the rest of the band and crew, my thoughts are with you! RIP Keith Flint. #genius

Absolutely devastated to hear that Keith Flint, the lead man of the greatest band of all time and one of my musical heroes has died at the age of 49. Totally gutted. What a legend.

Keith Flint from Prodigy has passed away. I’m totally heartbroken 🙁

Such sad news about the passing of Keith Flint .. Keith & The Prodigy's no nonsense approach to music was instrumental in my introduction to electronic music, RIP

I’m totally shocked by Keith flint passing… He’s one of the main reasons I fell in love with Electronic music.. so so sad…😞 RIP

Los Angeles, I just woke up and heard the terrible news of Keith Flint. Rest In Peace. One of the greatest frontman of all time. @the_prodigy pic.twitter.com/sKCGo0isY0

We are shocked about the sad news of The Prodigy's Keith Flint's death…. RIP pic.twitter.com/7F26qR67Yl

Tagged  Keith Flint, The Prodigy.
Bookmark the permalink.
We use cookies to ensure that we give you the best experience on our website. If you continue to use this site we will assume that you are happy with it.OkNoRead more