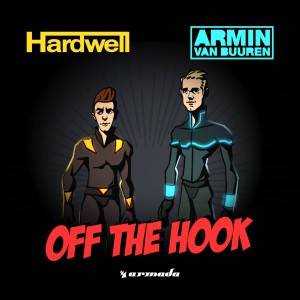 Launching their fresh, distinctive, and smashing joint venture into the world of cross-breed genres and boundary-defying collaborations, Armin van Buuren and Hardwell aim at completely obliterating the hottest clubs on the globe. The respectively former and current #1 DJs in the world allow for their bursts of creativity to define their team-up, resulting in an astounding dance floor thriller containing unmatched drive, impeccable chords, and pounding basslines.

With “Off The Hook” harboring tremor-like kick drums and hulking synths, the crazed crowds and rampant ravers are prove enough of the magnificence of the record. As much as the alliance between the two Electronic Music powerhouses itself, the tune is truly an unstoppable force. And with the tune featured on Armin van Buuren’s sixth studio album, there’s no question about it: “Off The Hook” is massive!

Armin about “Off The Hook”: “It’s so awesome to work with somebody who has a really clear idea about his own sound but is also open to merge his ideas with mine. I wanted to show the world that it can be exciting to try and blend two different worlds together and create something that’s more than just the sum of its parts. The result is a peak-time stormer that works really well in both our sets!”

Hardwell about “Off The Hook”: “It was great to finally work together with Armin and manage to produce one of the most unexpected collaborations!”

Take a listen to Hardwell & Armin van Buuren – Off The Hook here: