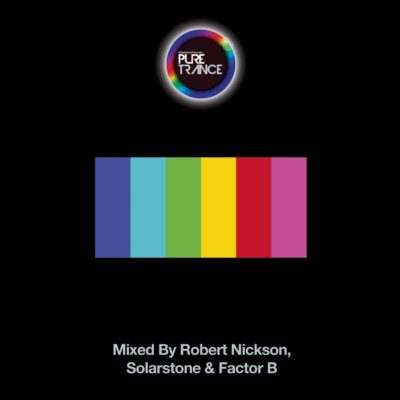 Looking back over the past five years, each autumn was highlighted with the yearly release of Solarstone’s critically acclaimed mix-compilation series “Pure Trance”.

While “Pure Trance 5” was the first edition of the series expanded to a three-disc/mix, “Pure Trance 6” will continue this new way. The goal is clear… reflect the beloved “Pure Trance Night” beginning-to end experience. For this 2017 journey, Rich has invited again two wonderful guests.

Announced as guest mixers for “Pure Trance 6” during the fabolous five hour “Pure Trance 100” live event in Amsterdam, Robert Nickson and Factor B will join Rich for this years “Pure Trance” journey.

Well known for his great slower progressive “RNX” sound, we can expect from Robert Nickson a great first mix to dive into the “Pure Trance” atmosphere. Robert delivers a masterclass in building clubfloor suspense. Over the opening course he seeds it with the prog-trancers like David Forbes’ Monolith, Slam Duck’s “Mercury II”, “Barracuda” from Three Drives and Forerunners’ “Just For A While”. At the mix’s meridian he drops “Atoms” – his new RNX preparation, and under his own name, in its latest stages comes the celestial “Somewhere In Spacetime”. In between flows all manner of trance manna, including new works from the likes of Basil O’Glue, Lostly and Gai Barone.

Robert Nickson about his participation on “Pure Trance 6”: “It’s been an absolute pleasure to be part of “Pure Trance 6″. Sourcing the tracks from every corner and creating this mix took months of preparation and meticulous fine-tuning. The first disc is very special as it can create the flow and atmosphere that leads the entire album. It has presented an opportunity to showcase another side of me that others may not have heard yet. Enjoy!”

Following Robert to the decks, well it’s that man Solarstone, up-ticking tempo, tickling the tone and investing an ever-greater sense of urgency into proceedings. His mix starts with the now-familiar opening strains of “A State Of Mind”, albeit in its new & exclusive Mike St. Jules’ Mix, which in turn cedes to Solarstone’s remix of Raz Nitzan & Moya “Clannad”, Brennan’s “Find The Sun”. Bookending an epic retell of Andain anthem “Summer Calling”, you’ll find “Renaissance” from Peter Steele, Danny Eaton’s “Concentration” and “Swelter”by David Broaders. PureNRG’s remix of BT & JES’ ‘Every Other Way’ isn’t far behind, while Solarstone & Indecent Noise’s ‘Querencia’ and Elucidus’ Bootleg Remix of System F & Armin van Buuren’s “Exhale” see it to its zenith.

On his modus operandi for the albums, Solarstone said: “One of my aims with each new edition of this compilation is to make the mixes a combined journey. Volume 6 is, I hope, the best example yet. Robert’s completely nailed the progressive build-up and you can’t get any more euphoric than Brendan’s mix! With mine nestled nicely in the middle, this is a proper Pure Trance soundtrack.”

The final set of “Pure Trance 6” is mixed by Pure Trance’s now traditional new(er)comer DJ. Brendan “Factor B” Blatt may have been making waves in trancedom for just 5 years, but they’ve been peaking ever higher with each 365 that’s passed. Factor B front-loads his mix with music hot off the studio desks of Neptune Project, Activa, Cold Blue and TrancEye. His own “Invidius”, The Noble Six’s “Black Star” and “Colourways”, courtesy of Lostly all preface Brendan’s Back To The Future Remix of Solarstone & Scott Bond’s “Red Line Highway”. Bringing mix-matters to a head, Will Rees’ rework of Gai Barone’s “Lost In Music” and Solis & Sean Truby “Coastal Route” deliver “Pure Trance 6” its final and most climactic moments.

On receiving his Pure Trance button, Brendan says: “mixing “Pure Trance 6” was one of the most exciting, yet challenging projects of my career thus far. My love for trance began during the golden era of the “journey mix”-compilations, ones that still give you the same thrill when you return to them years & years down the line. To me, the Pure Trance series still captures this ethos and naturally I wanted my disc on PT6 to be of the same calibre!”

With the faster melodic & uplifting sounds from Factor B and the wonderful progressive sound from Robert Nickson, both guest mixes add again a perfect addition to the “main event” from Mr. Pure Trance himself… Solarstone!

Expect a massive new edition of one of the greatest compilation-series at the moment… featuring 46 Exclusive & Brand New Tracks, Pure Mixes, Remixes, Retouches & Edits! We are excited!

Pure Trance 6 mixed by Robert Nickson, Solarstone & Factor B will be out on October 27th 2017 via Black Hole Recordings!

Get your digital or physical signed copy here:
http://pure.choons.at/vol6

Get the extended versions here:
https://pure.choons.at/vol6extended

Tagged  Black Hole Recordings, Factor B, Pure Trance, Pure Trance 6, Robert Nickson, Solarstone.
Bookmark the permalink.
We use cookies to ensure that we give you the best experience on our website. If you continue to use this site we will assume that you are happy with it.OkNoRead more